I recently had Superior Water & Air come to my mother-in-law’s home to clean her air ducts and do a radon test.

First, I need to talk about the house. She has lived in the home for about two and a half years. It was messy when we moved in (and smelled like dog) and a neighbor had once told me that the house actually looked a lot worse before the bank took over and they must have repainted it. She is still working on making the house nicer but cleaning the air ducts was not something she had done yet so I was pretty nervous about what might happen when Superior Water & Air would come to clean. 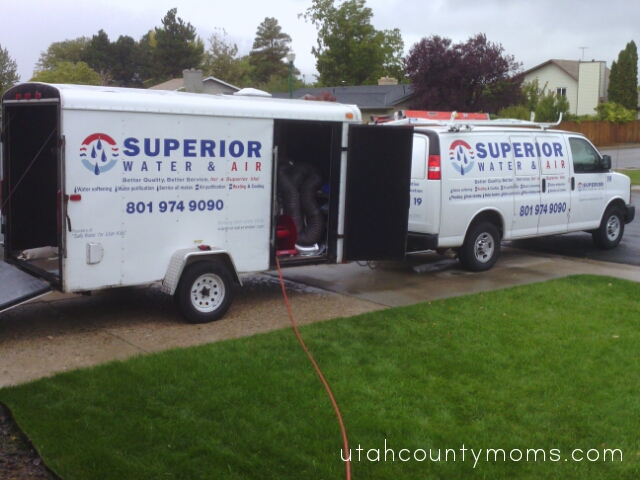 Rex and Ian of Superior Water & Air came to her house to do the cleaning, but not before Kally had called the night before, verifying that it was okay that they come. I love that. I knew that they knew we had an appointment and in return, they knew that we would be there when they arrived. So Rex and Ian called before they came to let me know that they were on their way. Another little thing that was nice – I didn’t have to stay at home all morning wondering when they would arrive. Instead, I was free to do whatever I needed to that morning and knew exactly when they’d be arriving.

When Rex and Ian arrived, Rex completely explained to me what they would be doing as well as answered a lot of the questions I had. After showing them where all of the vents were, they began their work.

Rex and Ian hooked up a huge vacuum, essentially, to our furnace in the basement and went upstairs to start cleaning them out. I recommend not sitting under vents in the basement when they are cleaning. For our house, at least, it was so dusty and things were falling out of our vents. I made the mistake of being under one once but I learned quickly to not be in the same room in the basement that was was below the one they were working in.

Rex and Ian found a rock about the size of my palm, two tennis balls, crayons, and a whole mess of all sorts of things in our air ducts. I feel positive that the air ducts had never been cleaned before which is absolutely disgusting, seeing as we use those ducts all of the time for air as it is pushed around our house.

After they were done, a lot of our things had a layer of dust and dirt on them, and our carpets needed a bit of vacuuming, however, thinking about how much the cleaned out of our air ducts and the fact that there was dirt that now needed to be cleaned up off of our floors and other things made me so glad they came because what we were seeing was just a small portion of what was actually in our air ducts and what we were breathing!

Having dirty air ducts can worsen Asthma and other breathing problems. Our air ducts and furnace were so messy that it can not only hurt us, but it can also damage the furnace. Keeping it clean can allow the furnace to have a longer life and keeps it in better condition. Rex and Ian also sanitized our vents which will at least one year so that means all of the bacteria and other things that were living on those vents that my children love playing with so much are now gone. I’m really hoping that these clean air ducts and vents will keep us feeling better this Winter. This may just be me and my brain, but I feel like it even smells better when the furnace comes on now.

Superior Water & Air also provided a Radon Test to the home. Radon is a natural occurring gas however, in large amounts, it can be very dangerous. If there are cracks and leaks in the foundation of your home, you are likely to have higher amounts of Radon. Too much Radon can lead to lung cancer and other problems. It is very serious and I recommend getting your home tested for Radon. The actual testing device will need to sit in your home for two nights, however, it’s tucked away in a corner in the basement and it only took about 10 minutes as they picked it up and printed out the report.

This is probably a small deal to most people, but as we are a no-shoe household, the first thing I noticed when they walked in was that they took off their shoes! It had been raining outside when they came so I was a little stressed about the amount of water and mud they would track through our house as they worked but it ended up not being a problem! I thought that Rex and Ian taking off their shoes was a huge sign of respect and I was very impressed (and not just because I’m Asian).

As I mentioned before, they called me to verify and notify me of their arrival. I thought it was great that I received a call the night before to remind me and verify that Superior Water & Air was planning to be at my house the next day. I was notified that they would arrive 8 am – 12 pm the next day (which was actually scheduled a couple of weeks prior), but because I knew that the technician would be calling me, I was able to run errands and get things done that I needed to because I knew someone would be calling. I liked that I didn’t have to wait at home from 8 am – 10:30 am, 10:30 am being the time they actually arrived.

Rex, Ian, and Rob (who came to pick up our Radon test) were all very nice and more than willing to explain everything and answer all questions that we had about the cleaning and Radon test. I was very impressed with how professional they are and how friendly they were.

Rex and Ian had laid down tarps of some sort to protect our carpets and floors as they moved their equipment around the house. They also seemed to be very gentle if they needed to move furniture which I appreciated.

Our ducts were so messy that all sorts of dirt and garbage fell out of our vents in our basement but Rex and Ian used a vacuum to clean up the mess so if it hadn’t been for dusting, I would not have had to have done a thing to our house after they left.  I really appreciated that they cleaned up after themselves and that the floors were all left clean when they left.

Get Your House Cleaned and Tested

If you would also like to try these services (which I strongly recommend), you can call Superior Water & Air at 801-974-9090 or visit the website at www.superiorwaterandair.com. Mention the discount code BLOG, and book duct cleaning special to clean 10 supply vents and 1 return, & the Dryer Vent for $89. Superior Water & Air will also offer a discount of $50 on a comprehensive Radon Test with would be a special rater of $149. 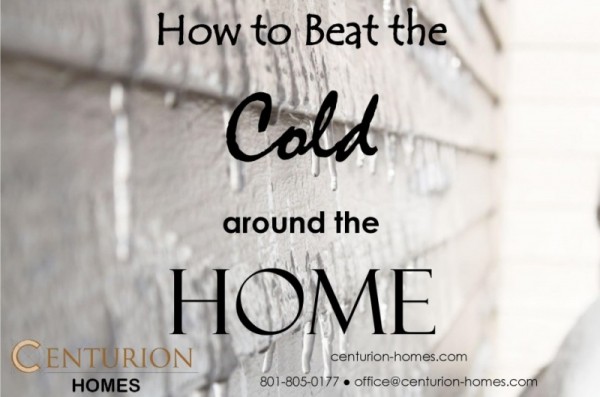 How to Beat the Cold Around the Home