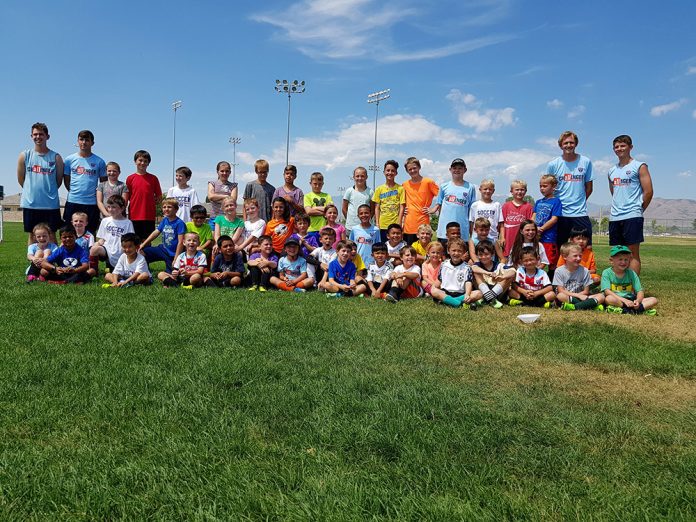 The British Soccer Camp comes to Utah yearly and is a highly-anticipated soccer camp. We knew nothing about it beforehand but were looking forward to having my son participate in this soccer camp and see what new skills he could learn.

The first day, I admit, I was a little anxious. My 6-year old son was the one who would be attending the soccer camp and while he loves soccer, he does not love waking up early (loves to sleep in until at least 9 am, sometimes more like 10:30 am) and this soccer camp starts at 9 am. Plus it was a 25-minute drive from my house. And on top of that, they want you to be 10 minutes early. I also have never left my 6-year old for a 3-hour camp before. I was a little nervous about the length and the fact that while my son loves soccer, he also can be a bit lazy and gets pretty worn out after about an hour of practice.

Other concerns I had included the fact that this camp incorporated all ages from 3-18. I noticed that the beginning and the end of the day began with all of the kids playing soccer games together. I wasn’t sure how that would all work itself out and whether this arrangement was really that ideal.

All of that being said, here’s what I enjoyed about the British Soccer Camp:

I actually really loved that all ages played together at the beginning and end of each camp. The older kids did not win every game. And the older kids didn’t necessarily let the younger kids win everything either. From the beginning, all of the kids were sorted onto teams. They named their teams after countries and each scrimmage was played country versus country. The kids of each age group were wall evenly spaced onto each team so every team had an oldest kid who was the leader who made sure the younger kids all felt accepted. The older kids obviously did really well in each scrimmage but were also responsible for making sure everyone was passing and that the younger kids all got chances to kick the ball, pass the ball, and had opportunities to make a goal. It was really incredible to watch. The kids learned the importance of teamwork in a way that is not usually available to them on their own soccer teams.

I loved their reward system. Each day the teams/countries received points for various things like teamwork, completing a take-home assignment (like coloring on their soccer ball that was given to them from the British Soccer Camp), and showing respect. The kids responded well to it and worked together as a team to make sure they received as many points as possible.

The drills were excellent. For drills, the kids were separated by age. At first I was slightly annoyed that my 6-year old was doing the same drill day after day with just varying names until I realized that he’s actually improving on his footwork and footwork is an essential part of soccer. So I ended up loving their drills and games. I also enjoyed watching the other age groups as they practiced making goals, footwork, and passing.

I’m looking forward to next year’s British Soccer Camp. It will definitely be an annual soccer camp that we’ll send our kids to and one that I know will help improve the kids’ soccer abilities while also giving them the opportunity to have a lot of fun and learn some good life lessons (like respect and teamwork).

Oh, and if you were curious as to whether my son made it to each soccer camp and lasted the entire 3 hours, he did and he did fantastic. He had so much fun I don’t think he even knew it was 3 hours long. I’m thinking next summer he’ll be able to do the all-day camp and he’ll have a blast!

I’d suggest signing up early next year. Not only will you get your free British Soccer game jersey (value $34.95) shipped to you for free immediately, but you will also get a brand new skill development App and 20 videos to help your child practice at home.

Keep in mind, your soccer ball, T-Shirt, and poster will be given out at camp.

Enroll using the link and discount code below: