I recently went to Nickel City with a bunch of adults and youth for the 4-H Mentoring program.  We played laser tag and had a bunch of nickels to play some games.  I was a little worried that I would be bored and it was going to be too kiddy but I was wrong!  It was so much fun!  The kids loved it and I enjoyed the games.

Laser tag was a pretty simple game compared to some other places I’ve played at but it was pretty fun.  The first game is $4 and every game after that is $3.  The arcade games were mostly good too.  It was actually a clean playing area and most of the games were in working order. All games run on nickels.

I would recommend this place for kids and families of all ages.  You can enjoy some pizza and dippin’ dots, play arcade games, and play laser tag.

Nickel City is located at 1515 S. State Street in Orem. 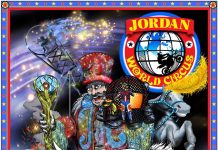 Best Deals on Disneyland until May 27